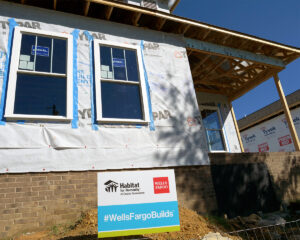 Habitat Greensboro is one of more than 220 Habitat organizations awarded a grant from Wells Fargo as part of its nationwide initiative to help low-to-moderate income families construct and improve homes across the country.

Habitat Greensboro will receive $15,000 and use the funding to help build a new home in Willow Oaks for Robert and Bryson. Five years ago, Robert lost his home to foreclosure when choices had to be made between medical bills and housing. Robert and his wife had separated, and Robert’s ex-wife continued to live in the family home with their son. While no longer together, Robert still supported his ex-wife, especially when she was diagnosed with cancer. With mounting medical bills, difficult choices had to be made. Unfortunately, Robert and Bryson ultimately lost a beloved family member and their home. 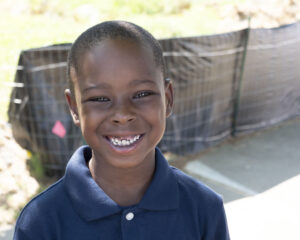 Not one to dwell on his loss, Robert has persevered and says he was happy to be accepted into Habitat’s program so that he can again provide a home for his son. As for Bryson, he’s all smiles!

The grant is part of a $7.75 million donation Wells Fargo is making to Habitat for Humanity International through Wells Fargo Builds, an initiative that provides philanthropic financial support and volunteerism to create sustainable affordable housing. More than 340 homes will be constructed or repaired with Habitat in over 40 states through the initiative this year. Wells Fargo Builds is part of Wells Fargo’s $1 billion philanthropic commitment to create more housing affordability solutions by 2025.