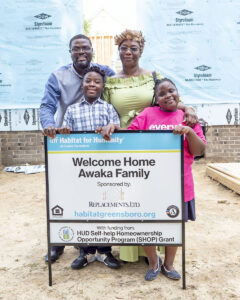 Didier did just that. In 2006, Didier moved from the Ivory Coast to Greensboro with limited English, no transportation, and few contacts other than his brother, with whom he lived. He entered the US through a Visa Lottery system but could not bring his beloved wife, Christine.

Didier, who holds a bachelor’s degree in history, worked two food service jobs for four years to save the money to bring Christine over to join him. He walked daily to each job for the first two years because he lacked a driver’s license and vehicle.

Through a chance encounter with his landlord, Kate Dunnavant, life began to change for Didier. “I’d never met such an energetic and positive person as Didier. He noticed me blowing leaves in the parking lot of the apartment complex and literally ran over to ask if I needed any help. It didn’t take long for me to see how smart and driven this young man was, and I realized he just needed some guidance to navigate his way to a more stable job and future.” Kate taught him how to drive, and through support from Wheels for Hope, he obtained a car, allowing Didier to obtain a better-paying job.

In 2010, Kate agreed to sponsor Didier’s wife, Christine, to come to the United States. The couple welcomed their first child, Chris, in 2011 and completed their family with a daughter, Myriam-Deborah, in 2013.

With a family to support, Kate encouraged Didier to go back to school. With financial support for tuition and school supplies from First Presbyterian Church, he earned his CNA certification. Didier is currently employed as a CNA and has received multiple awards for going above and beyond on the job. He later obtained another certification in Technology Management Training from GTCC and now has a second part-time job at a medical office. 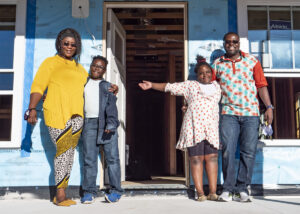 Didier and Christine have dreamed of having a home for their family. Says Didier, “It’s my dream to have a big home where everyone will have their own space, especially my two children. It will allow them to learn the responsibility of taking care of their part of our home, and that’s important for their future.”

Didier and Christine laugh together when they talk about the most important lessons they’ve learned during the Habitat financial classes, which are part of their “sweat equity” commitment to becoming homeowners. “We’ve learned so much about saving money and to ask ourselves about every purchase… is this a need or a want? The most exciting thing about this house is that it will be our first real asset! I’m setting goals now for next year, the next five years, and even ten years because I’ve learned that when you really manage your money and your assets, you can do that!”